← more from
Spotted Peccary Music | Progressive Ambient Electronic
Get fresh music recommendations delivered to your inbox every Friday.
We've updated our Terms of Use. You can review the changes here.

Dragonfly Speaks – From the album VISION OF EDEN by Bart Hawkins 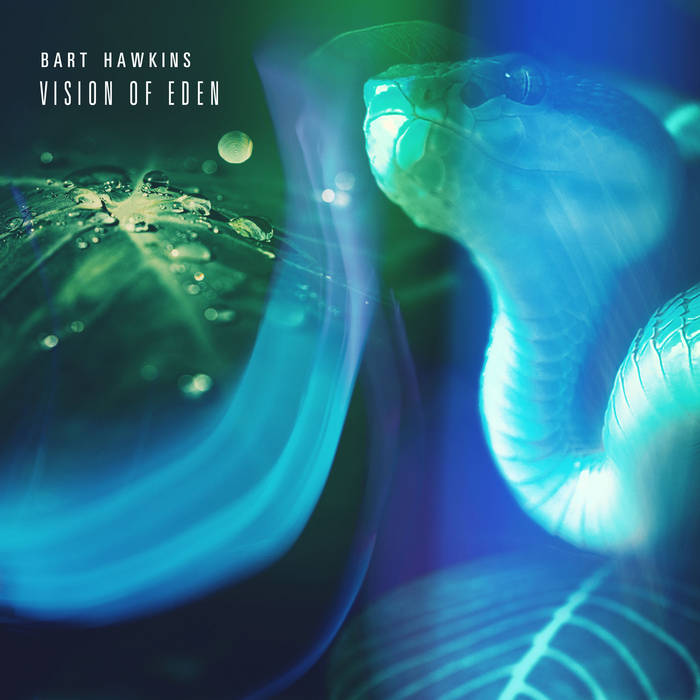 On Vision of Eden, his second album for Spotted Peccary, Bart Hawkins once again proves himself a skilled sonic architect, building rich and prismatic landscapes with modular synthesizers. His first album 21 Pulse Eclipse was pure sonic exploration; Vision of Eden preserves that spirit while adding a narrative layer. Using not a single keyboard, Hawkins embraces the modular challenge: “to create my own unique sonic signature and shape the character of that sound to tell a story.”

Vision of Eden draws its story from the book of Genesis, presenting this time-honed tale in a bold new format. Shimmering fractals of sound guide the listener from Eden’s peace to the world’s swirling creation to the Serpent’s temptation and beyond.

Opener “Garden of Grace” immediately invites the listener into Eden’s otherworldly beauty. Warm chimes ebb and flow like a breeze through branches, evoking the latticed glow of sunlight through trees. Sounds of children playing echo through this expansive ambience. On “Sidewinder,” jangling guitar rattles—made by placing forks and spoons between the strings—dance over ominous drones to signal the Serpent’s approach. A slinky groove embodies temptation: the Serpent’s promise of forbidden knowledge. Temptation indulged, “Descent Into the Forbidden Fruit” rumbles like an earthquake in slow motion as subterranean bass warps under haunting hums to capture innocence shattered, the mind pushed to its impossible edge—before a graceful return to nature in meditative finale “Dragonfly Speaks.”

Though his fascination with Genesis began in childhood, Hawkins’ recent move to a sixty-four acre ranch brought renewed inspiration. While sitting under the trees at his ranch, Hawkins explains, he was “inspired by the dynamical relationship between the Tree of Life and the Tree of Good and Evil and the different ways they affect human life.”

Here, Hawkins takes a familiar story into uncharted territory. Sometimes serene, sometimes harrowing, yet always immersive, Vision of Eden is complex and dreamlike that thrums with the energy of invention.

Produced, composed, performed and mixed by Bart Hawkins.
All music and sounds were created entirely on a modular synth, and with an electric guitar on Sidewinder.

Thanks to Ross Hawkins for the use of his electric guitar for Sidewinder. Special thanks to Cassandra Auker for the continuing support and inspiration.

Bandcamp Daily  your guide to the world of Bandcamp